Betting on the EuroMillions with Jackpot.com is almost the same as participating in the lottery itself. The difference is rather than buying a physical ticket, you are betting on the outcome of the draw. If you pick the winning numbers, just like if you bought a physical ticket, you win the prize! Below is a list of FAQs related to the draw - if you have any further questions don’t hesitate to contact us.

When? The EuroMillions draws take place at 21:00 CET twice a week, every Tuesday and Friday.

Where? Draws take place in Paris but since you can bet on the EuroMillions from home, you can also easily check the results and see if you’re the lucky winner from home. Just navigate to our EuroMillions results page or click here to see the latest results.

About the EuroMillions Rule Changes:

On February 1, 2020 the games prize structure was changed to add a larger percentage of sales to the jackpot prize tiers. This change made the jackpots grow even more quickly which means bigger prizes are reached even faster.

The change also meant that more money was put in the EuroMillions reserve fund so there are special promotions 3 times a year instead of 2 with a minimum jackpot of €100 million. Of course, it wouldn’t be possible to make these changes without also increasing the maximum jackpot, so the maximum jackpot was upped from €190 million to a whopping €200 million. The rollover rule applied to the new capped jackpot amount.

How to bet on EuroMillions:

It’s easy to bet on the EuroMillions from anywhere in the world! Just follow 3 simple steps.

1. Pick 5 numbers between 1-50 and 2 Lucky Stars from 1-12. Alternatively, you can use our QuickPick option to have numbers randomly chosen.

3. Select ‘Add to cart’ to complete your transaction.

Or, if you would like to subscribe to the EuroMillions and have your bet placed automatically in future draws, select one of the subscription options we offer after you’ve picked your lucky numbers. Then complete your transaction and your subscription will be complete.

EuroMillions
€17Million
Pick
2 QuickPicks for only €10.00 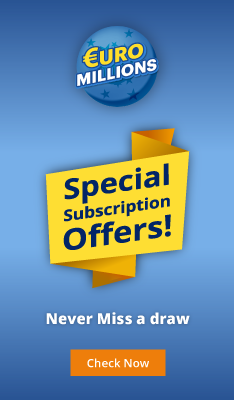 Don’t worry, if you win we’ll notify you via email and the prize money will be transferred to your account as soon as possible.

How much do EuroMillions jackpot winners actually scoop up?

The minimum EuroMillions jackpot is €17 million and the maximum is €230 Million. The maximum jackpot amount was actually €190 million until February 1, 2020 when the amount was increased adding even more excitement to the beloved draw.

How do EuroMillions prize tiers work?

There are 13 tier prizes in total. There are 4 prize tiers with awards paid for matching anything from three numbers or more. The value of each prize including the jackpot is dependent on ticket sales and the number of winners per prize tier.

If there are multiple winners for any given prize tier the amount is split between the players. The jackpot starts at €17 million and If unclaimed, the jackpot rolls over until it reaches its cap.


* The amounts shown above have been taken from the official EuroMillions lottery prize breakdown. Jackpot.com prize amounts are calculated in accordance with our Terms and Conditions.

The roll-down rule is a rule that was introduced, and appropriately named, by the EuroMillions in 2016. The rule states that after the jackpot reaches its cap, it will remain at the capped amount for 5 consecutive draws. If after those 5 draws it’s still not won, the prize money will roll-down and be divided between the winners of the next highest prize tier.

What’s so special about the EuroMillions Superdraws?

The EuroMillions Superdraw is a special lottery event that the EuroMillions puts on from time to time. Superdraws are special because they offer a pre-set jackpot which guarantees a massive 9-figure prize.

Superdraws follow the same rules as the regular EuroMillions draw in terms of where and when draws take place as well as the draws rules.

Although Superdraws can happen any time, historically, the most popular months for them are September, March and June. Usually, the EuroMillions put on 2 Superdraws a year, but once the new rules were applied on February 1, 2020 this special event was increased to 3 times a year.

Has Jackpot.com had any EuroMillions winners?

The first Jackpot winner was Valentin, a welder from Enfield in London. He won a hefty €248,864.38 prize on March 21st, 2017 just a few weeks after registering with Jackpot.com.

Maria from Malta, the second Jackpotter to win the EuroMillions, scooped up €97,312.73 through her EuroMillions subscriptions with Jackpot.com. Jackpot.com’s own Corey had the pleasure of calling Maria to tell her she won. When she first found out she couldn’t believe her own luck and said: “You must be joking, are you sure it’s €97,000 and not €9,700?”.

Lucky woman from the UK won an attractive €455,000 in January 2022. When we first reached out, she couldn't believe it! She told us that at first she believed it was a scam when she saw the email saying she’d won €455k, but our phone call quickly made it a reality. When we asked her how she’d picked the numbers, she said that there wasn't anything special about them, she’d simply felt like using the quick pick option (how’s that for good instincts).

WELCOME TO JACKPOT.COM
ALL THE JACKPOTS IN THE WORLD

THANK YOU FOR VISITING JACKPOT.COM!

CURRENTLY, WE ARE NOT ALLOWED TO ACCEPT
PLAYERS FROM THE UNITED STATES